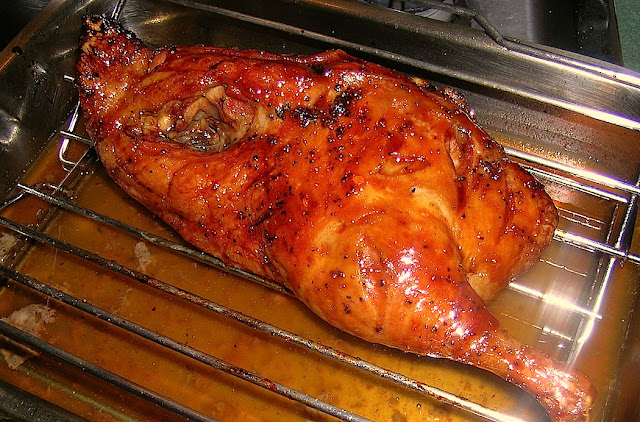 When you're cooking for one or two people you obviously cook smaller amounts than you would for a larger group. The other day I noticed Friendly Market had half ducks in the meat department. This is a perfect size for two people for a special occasion, or just because you deserve to treat yourself.

I already have a great recipe for cooking a whole duck with a honey glaze, so I adjusted the recipe for half a duck, and here it is. Hopefully you will be able to find half a duck at your market, if not, defrost a whole one and cut it in half lengthwise with kitchen shears, re-freeze one of the halves and roast the other.

Procedure:
Remove duck from the refrigerator at least 30 minutes before roasting.

Put oven rack in the middle position and preheat oven to 425˚F.

Rinse duck half and tuck wing tip under bird, or remove the wing as I did. Score skin with a knife, in a criss-cross pattern, then prick skin all over with a sharp fork. Mix salt, pepper and ginger and rub the duck all over with it. Put duck, skin side up, on a rack in a 13 x 9 x 3-inch roasting pan. Pour boiling water into pan. Roast duck for 45 minutes, then turn the duck over and cook for another 15 minutes.

Meanwhile, in a small sauce pan, combine and simmer glaze, stirring until it gets thick and syrupy. Glaze duck all over (inside and out) with a basting brush, then continue to roast duck, skin side up, until it is a beautiful mahogany color, about 15 minutes more (total roasting time: about 1 hour and 15 minutes or until the internal temperature reaches 180˚F). Transfer duck to a cutting board, cover with foil, and let rest 15 minutes before carving. Discard liquid in roasting pan. Serve duck with a nice red wine like pinot noir.

Note: Allow at least 1 pound of duck per person, as there is a rather large ratio of fat and bone to meat. If the duck comes with giblets, freeze them for stock later.

Email ThisBlogThis!Share to TwitterShare to FacebookShare to Pinterest
Labels: Honey Glazed Half Roast Duck For Two, Roast duck for two, Roasting half a duck