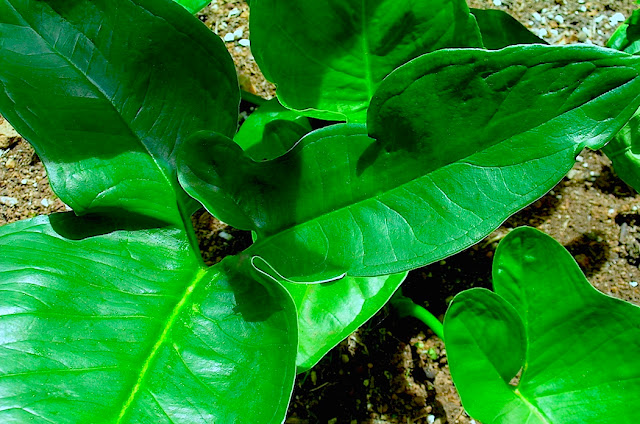 Recently I was gifted with stem cuttings of 'Tahitian Taro' by my neighbor Mana Puaoi. It turns out that this plant, Xanthosoma brasiliense, is a species of flowering plant in the Araceae family. It has a few other names like Tahitian spinach, tanier spinach, belembe and calalou. Mana told me that the difference between Tahitian Taro and Hawaiian Taro is that Tahitian Taro is grown mainly for its leaves. Hawaiian Taro is also grown for its edible leaves, but is primarily grown for their starchy corms, which is what poi is made from.

After a little digging online, I found that this plant is not native to Tahiti nor is it a taro. It turns out that this plant has been around for a long time. It originated in the Amazonian region of South America and was widely cultivated long before Columbus arrived in the New World. Its popularity spread throughout tropical Asia and Africa by ancient sailors.

Today the plant is hard to find because it rarely produces seeds. Instead it is propagated from corms or stem cuttings that must be obtained locally. The plant is shade tolerant but can't tolerate sandy or dry soil with very low organic matter content. Basically it thrives under hot wet conditions but is slow growing. Tahitian Taro can grow up to 4 feet high if given good growing conditions.

Unfortunately the leaves of the Tahitian Taro contain calcium oxalate crystals, and when eaten raw or inadequately cooked, can irritate your lips, tongue and throat. It should be well-cooked and the cooking water discarded. After cooking, it is soft in texture and delicate in flavor, similar to spinach.

This plant grows and produces nutritious greens year round, and is rich in vitamins A and C and in phosphorus and contains a significant amount of protein. It is successfully grown by subsistence farmers in areas of the world where malnutrition is a real threat, hence the name "Leaf for Life".

So what can you do with this spinach-like, healthy plant? There is a very popular dish in the Caribbean called 'Callaloo'. In Grenada, callaloo is steamed with garlic, onion and coconut milk and often eaten as a side dish. It is sometimes combined with tomatoes, crab, conch, lobster, chicken, pumpkin, and chili peppers.

Hawaii uses the leaves from Tahitian Taro to wrap around pieces of salted butterfish, and pork shoulder in a dish called 'Laulau'. The bundles are then wrapped in ti leaves and steamed for 3 or 4 hours. Another popular Hawaiian dish is called 'Squid luau' made up of tender cooked squid or octopus that it is stewed in taro leaves and coconut milk.

When harvesting the leaves of this tropical plant, use only the large older leaves, unless yellow or damaged. Taking tender young leaves will slow the growth of the plant. I cut away the petiole and principle vein, which can be chopped for vegetable soup, then boil the leaves about 20 minutes, and discard the water. By then Tahitian Taro is almost a puree, similar to spinach. Season to taste for a really elegant side dish.

One of my favorite ways to use Tahitian Taro is to make a quiche with it. Here's my recipe:

Pour egg mixture into pie crust, topped with slices of Roma tomatoes all around the edge of the quiche. Bake at 350˚F for 45 minutes or until knife inserted in centre comes out clean.

Cool for 15 minutes and serve with a mixed green salad. Serves 6

Note: Coconut cream is the thick coconut milk that rises to the top of a can of coconut milk. Don't shake the can before you open it and you can skim it right off the top.

You can use frozen chopped spinach if you can't find Tahitian taro leaves, in which case simply thaw, then squeeze dry before adding to this recipe. Also you can add 1/2 cup thinly sliced cooked squid to this dish for a Squid Luau Quiche. If you don't like squid, substitute chopped raw shrimp.

In a large pot heat the oil and butter over a medium-low flame and sauté shiitake mushrooms and onions until wilted.

Add the Tahitian Taro, and minced garlic. Be careful not to brown the garlic. Now add 1/4 cup of water, cover and cook for 10 minutes. Season with salt and pepper to taste. Best served as a side dish with fish or chicken and rice, or stuff wonton wrappers and sauté or boil in soup stock with vegetables.

Posted by James Temple at 2:16 PM No comments: