Saloon Pilot crackers, "pelena poepoe" in Hawaiian meaning "round cracker", are an important part of Hawaii's culture, a staple snack food found on grandma's kitchen table along with butter and jelly; or a classic plantation snack: dipped in canned condensed milk.

Diamond Bakery, founded in 1912 by Japanese immigrants on Oahu, is the home of the popular Saloon Pilot cracker. Saloon Pilots were a descendant of hardtack, or “sea biscuits”, a nonperishable staple of 19th-century sailors' diets. Hardtack was made from unleavened bread, which gave them the ability to survive rough handling and long voyages on the high seas. It was a product which kept for a long time and was easy to store. They were made of oil, flour, baking powder and salt, and were oval-shaped with a little dimple in the center. It is believed that Diamond Bakery's founders got a recipe for these crackers from merchant seamen from Maine who settled in Hawai'i. Nearly nine decades later, Diamond Bakery's Saloon Pilot crackers are being sold back to Mainers where they are a favorite alongside chowders and stews.

Because these crackers are so dry, and almost saltless, they beg for a topping. Today Saloon Pilot crackers are enjoyed in Hawaii topped with cheese or Spam or spread with peanut butter and lilikoi, mango jam or kiawe honey. Some locals spread them with ground meat, cheese and tomato sauce making little pizzas out of them, or they eat them topped with ahi tuna poke, along side "da' kine", a cold Bud Light. I like to "kick it up a notch" by spreading roasted beef bone marrow on top with some sweet pickled Maui onions on the side as a pupu, or served alongside a nice hot bowl of Coconut Fish Chowder (recipe). 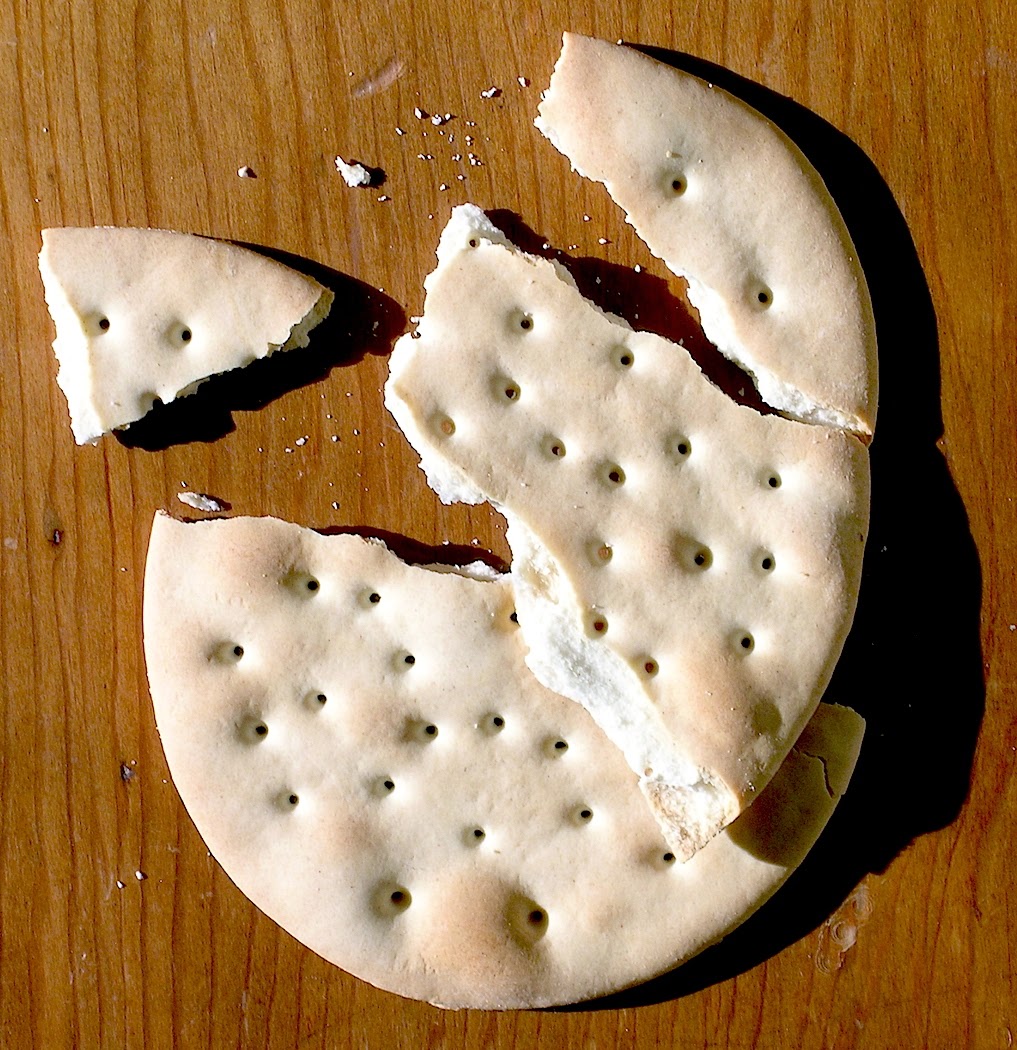 Hawaiian
Sea Biscuits
If you want to try making your own hardtack crackers, here's a simple recipe.

Procedure:
Preheat oven to 400˚F. Mix all ingredients together. Turn onto a floured board and knead for five minutes. Let dough rest for 10 minutes. Knead again for a couple minutes and allow dough to rest for another 10 minutes. Roll out the dough to 1/4 inch thick. Use the rim of a cup or container to cut out 3"- 4" circles. Use a fork or skewer to prick the center of the circle a few times. Arrange on 2 baking sheets and bake for 20 minutes rotating baking sheets every 5 minutes. Turn oven off and leave crackers in oven until completely cool. This is what gives the crackers the "hard tack" texture. Makes 9-12 crackers (depending on size).