Most of the time I buy my spinach from the grocery store, but lately I have been disappointed in the quality of the product. Either it looks old and damaged, or dirty with long tough stems. So what can I do about it. I do enjoy growing my own vegetables. Living 1,200 feet above sea level provides me with cool, rainy weather most of the year, and Spinach prefers cool, damp weather, but is sensitive to Hawaii's highly acid soil, so amending the soil is necessary for this vegetable. 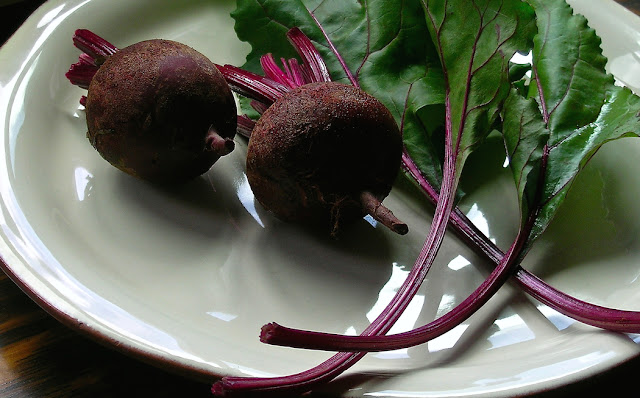 Another alternative is to grow a spinach substitute like beets for their tops, and beets will grow anywhere in Hawaii. I love beets, not only for the traditional beet root, but the leafy green top which taste very much like spinach when cooked. It takes 60 to 80 days before beets are ready to harvest, however you can pick up to 1/3 of the plant's leaves while the plant is growing without harming it's root.

Another alternative to spinach is an Asian plant called tatsoi. Tatsoi is the new spinach but is actually not spinach at all. It is related to pat choi or bok choy, but is much smaller, with a texture similar to spinach, but sturdier. I first noticed this variety here on Moloka'i at Kumu Farms. It is sold in little bunches about 6 inches long, and has dark green leaves with a thicker stem than common spinach. It has a creamy texture and a subtle yet distinctive flavor reminiscent of mustard greens in heat although not as hot. Tatsoi seems to grow quite well here in Hawaii.

Tatsoi is wonderful eaten raw in salads and sandwiches, in stir-fry recipes, or in soups like the wonton soup below. Actually you can use Tatsoi anywhere you'd use spinach.

If you are interested in this very easy to grow green in your own garden, check out this seed companies website.

Spoon about 1 tablespoon of the pork filling onto the center of each wonton wrapper. Use your finger or a pastry brush to lightly moisten the edges of the wonton wrappers with water. Fold one corner of the wrapper over the filling onto the opposite corner to form a triangle. Press the edges together to seal. Moisten the two long ends of the triangle, fold them together, and press them firmly to seal.

Bring the chicken broth and mushrooms to a boil in a large saucepan over medium heat. Drop the wontons, one by one, into the broth, and let them cook for 5 minutes, until they float to the surface. Reduce heat to a simmer, and gently stir in the shrimp and Tatsoi. Let the soup simmer 2 more minutes, until the shrimp turn pink, and then drop in the snow pea pods. Garnish with the remaining green onions and a dash of soy sauce and sesame oil, and serve immediately. Makes 4 servings.

Note: I like to make my own chicken stock because it tastes better and it's much cheaper than buying store bought broth. Simple buy a 5 pound box of frozen chicken thighs from Friendly Market. Defrost it in the refrigerator over night. When defrosted, rinse the chicken well under cold water. Dry the chicken and put it in a large pot with one large chopped onion and 3 tablespoons of canola oil and brown the chicken for about 20 minutes. Then add one chopped carrot, 3 chopped celery sticks, 1 teaspoon black peppercorns, a bay leaf, and a 2 inch knob of fresh ginger that has been smashed with the side of your knife. Now add 8 cups of water with 2 tablespoons of salt. Bring everything to a boil, then simmer for 2 hours with the lid open a little on top of the pot. After 1 1/2 hours, taste the stock and season with more salt and pepper or soy sauce if needed. Strain everything, saving the chicken. When cool, put the chicken broth in plastic containers and freeze. Take the chicken apart and discard the bones. Divide the meat into plastic zip-loc sandwich bags, then put all of the bags into a zip-loc freezer bag and freeze for later use, like stuffing wontons, making chicken salad, or whatever. You just saved yourself $6. Chicken stock lasts about a week refrigerated or 1 month frozen.

Did you know that you can freeze leftover wonton wrappers and reuse them later. Simply tightly wrap them in plastic wrap, then put them in a zip-loc freezer bag. Let them come back to room temperature before you reuse them, otherwise they will be brittle and break.


Tatsoi with Oyster Sauce
This recipe is very easy to make and is a delicious served as a bed for a slice of broiled salmon.

Procedure:
Wash and dry Tatsoi. Remove the core and discard, cutting up the stems and leaves into 2 inch pieces.

In a wok or large fry pan, gently fry the garlic in the sesame oil over medium heat being carful not to brown the garlic.

Add the chopped Tatsoi to the pan and stir-fry for 2 or 3 minutes or until wilted but still bright green.

Stir in the oyster sauce and stir-fry until the stems have cooked through and no liquid is left in the pan.

Taste the Tatsoi and season with a little salt and black pepper if needed.