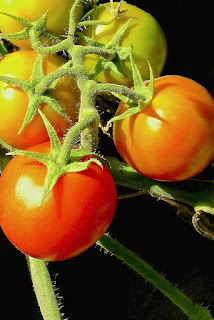 If you live here in Hawaii, you know we have a problem with our tomatoes, it's called the fruit fly. They love to sting ripe tomatoes and lay their eggs. Eventually the tomato rots, usually on your kitchen counter. However if you eat green tomatoes, this is not a problem. Have you ever eaten pickled green tomatoes? It's a Jewish thing, and they are terrific!

When I lived in San Francisco I used to go to a Jewish restaurant that always had pickled green tomatoes. Eventually I developed a recipe that I liked and I am going to share it with you, naturally. This is a recipe built for almost instant pickled green tomato relief, because it only takes 1 day of pickling before you can open the jar and enjoy a crisp tasty wedge of green tomato pickle. The longer the tomatoes sit in the jar the softer and more pickled they become, but I usually can't wait. This recipe is similar to my spicy pickle carrots posted this month, but with less spice.

1 teaspoon olive oil
2 red or green jalapeno pepper, cut lengthwise into 8 slivers, remove most of the seeds, or use Hawaiian chili peppers as shown in photo
4 cloves of garlic, smashed and skin removed
1/2 of a small yellow onion, cut into slivers
2 teaspoons dried dill
2 teaspoons pickling spice, divided
10 large green roma tomatoes, enough to fill 2 quart canning jars (you can use cherry or regular tomatoes as well, but they need to be green or they get too soft)

Procedure:
Put your jars and lids in a large pot and cover with hot water. Put the lid on the pot and boil the water on high heat. allow to boil for 10 minutes, and then turn the heat off.

To make the brining solution, to a medium sized pot, add 1 1/2 quarts (6 cups) of hot water, 4 1/2 tablespoons of sea salt, and 3/4 cup of white vinegar. Stir and bring to a boil on medium heat. Meanwhile in a small skillet, saute the jalapeno pepper, garlic, and onion in the olive oil, over medium heat, until the onion just starts to get brown around the edges, but not burnt. Turn the heat off.

Next wash and cut the roma tomatoes into quarters, lengthwise, or use whole green cherry tomatoes. Divide the jalapeno peppers, onions and garlic equally and put them into the bottom of each sterilized jar, along with 1 teaspoon of dried dill and pickling spice. Now fill the two jars with the green tomatoes, gently pressing them into the jars to get as many into each jar as you can, but leave about 1/2 inch of room at the top of each jar. Put the jars into your kitchen sink and carefully pour the hot brine into each jar, leaving 1/4 inch of air space. Immediately seal the jars with the hot lids, and close them very tightly. Leave the jars on your kitchen counter at room temperature for about 24 hours. If you like crisp tomatoes, you can eat them the next day. After 24 hours, refrigerate the pickled tomatoes if there are any left that is. Makes 2 quarts.

Note: Unless you grow your own tomatoes here on Moloka'i, it can be difficult finding green tomatoes. You can sometimes find them at Kumu Farms or Farmer's Market.


Roasted Beet Carpaccio
with Pickled Green Tomatoes
Carpaccio is Italian. It is a side dish of raw meat or fish (such as beef, veal, venison, salmon or tuna), thinly sliced or pounded thin and served mainly as an appetizer. I am a big fan of beets, so I am always looking for ways to serve them. While I was in the Caribbean years ago, I was served beet carpaccio in a French restaurant made from thinly sliced beets, placed in a circle on a bed of arugula, with a vinaigrette dressing. I have also seen thinly sliced roasted beets serve over thick yogurt, then sprinkled with dried mint, or thinly sliced roasted beets sprinkled with feta cheese, and garnished with watercress leaves. My version pairs the sweet taste of roasted beets against the tart and crunchy pickled green tomato. This is one of my favorite side dishes.

Wash the beets, do not peel. Dry with paper towel. Place beets in a pouch made of heavy duty aluminum foil, large enough to enclose the beets. Sprinkle the beets with the olive oil, balsamic vinegar, and a pinch of salt. Wrap the foil tightly around the beets. Place in oven and roast for 45 minutes to 1 hour (timings vary from oven to oven). Test with a sharp knife, if is slides through easily, the beets are cooked. Remove from oven and allow to cool for 20 minutes. Remove the skin and carefully slice the beets very thinly. Set aside.

Next, thinly slice the pickled green tomatoes. On a large serving plate or individual plates, arrange the beet slices overlapping in a circle. Now place several slices of pickled green tomatoes in the center of the beets, also arranged in a circle. Garnish with a sprinkle of dried dill. Makes 2 servings as an appetizer or a side dish.
Posted by James Temple at 1:11 PM