Hawaiian limes are actually called Tahitian limes, and they grow very nicely here on Moloka'i because of the acidic volcanic soil and warm tropical sun. Actually I have heard them referred to as "lemons" here on the island, probably because our local Tahitian limes turn a pale yellow/green when ripe. I am surprised that I haven't seen more lime trees growing on Moloka'i than I have, because the cost of buying a single lime is $1.65, or $3.99 a pound at Friendly Market on 3/2/12, and only .69 cents each at Wines and Spirits, quite a price difference, probably because Wine and Spirits sells local limes. You hardly ever see them for sale at our farmers' market for some reason. I have two trees in my yard that I planted seven years ago when they were already 3 years old. I bought them, and other citrus trees, from Frankie's Nursery on Oahu. One year after planting the trees, they started bearing fruit and have been ever since. Unfortunately the local deer like to pull the limes off the lower limbs in the middle of the night, but when they take a bite, they leave them on the ground because they are so tart. That's alright, I have plenty more limes higher up in the trees.

As it turns out, there are two types of Tahitian limes, Persian and Bearss, which are very similar to each other. The Tahitian Persian lime is slightly larger than Tahitian Bearss lime. We have the Bearss type here on Moloka'i. Both Tahitian limes are greenish yellow when ripe but are harvested to be sold when they are still green because the acidity level is higher, which they say provides a better flavor, but I'm not convinced of that. Tahitian limes have a fairly thin rind and their flesh is pale green, seedless, and very juicy. In the United States, the majority of Persian limes are grown in Florida and the Bearss limes are grown in California and Hawaii. The Tahitian limes are often used in the well-known key lime pie because the small key limes found in Florida and Mexico, are often not available. Tahitian limes are not as acidic or aromatic as key limes, but they are great to cook with. I think one reason more lime trees are not grown on Moloka'i is that people here don't realize how many delicious lime recipes there are, and how good they are for you. Limes are a particularly good source of vitamin C and is a potent natural antioxidant to help ward off heart disease and cancer.

Cooks notes: If you want more juice out of your lime, put it in the microwave for 10 seconds or so. Then roll the fruit with the palm of your hand on the kitchen counter a few times and the softened lime will give you plenty of juice. If you need the zest, make sure you grate the skin before softening the lime. Tahitian lime skin is very high in aromatic oils which will give your recipes a terrific flavor. Here are a few lime recipes for you to try:


Procedure:
Preheat broiler with rack set 4 inches away from heat. In a small bowl, stir together hoisin and honey; set aside. Spray a baking sheet or broiler pan with cooking spray. Place salmon on sheet, skin-side down. Squeeze juice of half a Tahitian lime evenly over salmon; season with salt and pepper. Place under broiler, and cook for 5 minutes. Remove from oven, and drizzle each fillet with 2 teaspoons hoisin mixture. Return to broiler, and cook until glaze is bubbling and salmon is cooked through, 2 to 3 minutes. Serve on top of a mixture of jasmine rice and edamame, then garnish with sliced green onions and lime wedges. Serve immediately. Makes 4 servings.

Procedure:
Zest both Tahitian limes into a bowl. Squeeze in juice from 1 lime only, and whisk in fish sauce and sugar. Preheat grill to high. Brush shrimp with oil on both sides, and lightly season with salt and pepper. Grill until pink and firm to the touch, 2 to 3 minutes per side. Toss shrimp with fish-sauce mixture, cilantro, peanuts, and green onions. Squeeze remaining Tahitian lime over shrimp. Makes 4 servings.

Procedure:
In a small bowl whisk together Tahitian lime juice, olive oil, honey, salt to taste and ceyenne pepper. Pour half of mixture over chicken in plastic zip-lock bag, saving remaining mixture for later. place bag of chicken in fridge for 1 hour. Spray cold grill rack with nonstick cooking spray and preheat grill to medium heat. Remove chicken from bag and discard marinade from bag. Place chicken on grill, cover with lid and cook 8 to 10 minutes on each side or until tender and no longer pink. Chop into pieces. Then, combine chicken pieces, avocados, tomatoes, cucumber and basil in large salad bowl. Toss gently with reserved lime mixture and serve. Makes 4 tasty servings. 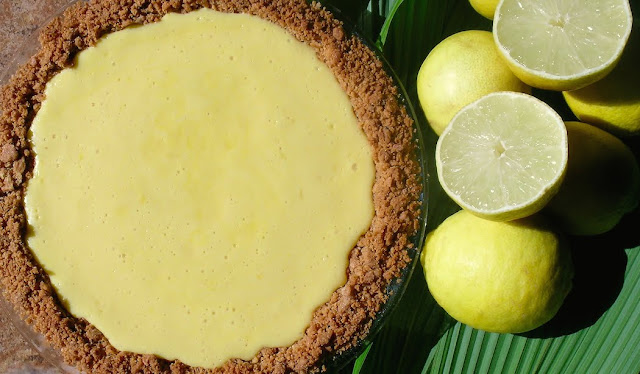 Procedure:
Preheat the oven to 350˚F.

For the crust, place the graham crackers in a food processor and pulse until crumbs are the same size. Put cracker crumbs in a bowl and add the sugar and butter. Mix to combine. Press the crumbs evenly over the bottom and sides of a 9-inch pie pan. Bake for 8 minutes. Let cool.

Use an electric mixer and beat the yolks until thick and turn to a light yellow, don't over mix. Beat in the condensed milk, lime juice and rind. Pour into the prebaked pie shell and bake for 12 minutes. Once it has completely cooled, cover and refrigerate, about 4 hours. To serve, whip the cream and sugar. Pipe a lattice pattern on top, or spoon dollops around the edge. Makes 8 servings.

Procedure:
Preheat the oven to 350˚F. Spread coconut in a baking sheet, and toast until golden brown, 6 to 8 minutes, tossing every 2 minutes to evenly brown. Remove from oven; transfer to a plate to cool. In a large mixing bowl, combine flour and sugar, and add half the toasted coconut. Using two knives or a fork, cut the butter into the flour-coconut mixture until it resembles coarse meal. Pat mixture into a 9"x13"pan, and bake until golden, 20 to 25 minutes. Allow to cool slightly. Meanwhile, beat together egg yolks and condensed milk with a whisk until thick. Gradually beat in Tahitian lime zest and juice. Pour into cooled crust, sprinkle with remaining toasted coconut, and bake until just hot, 6 to 8 minutes. Cool completely, then chill until ready to serve. Cut into six 2 1/3-inch rows; cut rows on a diagonal to form diamonds. Before serving, sprinkle with confectioners' sugar, and garnish with Tahitian lime zest. Makes 24 delicious bars.

Procedure:
Peel mangoes and carefully cut the flesh away from each mango's pit, then roughly chop the flesh. In a blender, Add the chopped mangoes, lime zest, and lime juice. Add the sugar and 1/4 cup cold water, and blend until the mixture is smooth. Pour the blended mixture into four serving glasses, and place in freezer for 1 hour. Makes 4 refreshing servings.


Tahitian Swamp Water
Swamp water is a non-alcoholic drink that is actually delicious. I first had this on a hot day in the Caribbean. There is an alcoholic version of this drink as well, but this one works for me.

Procedure:
Place ice in a tall glass. Fill halfway with lime juice and top with iced tea. Sweeten to taste
Posted by James Temple at 11:53 AM